Get ready for the blockchain apocalypse with this app

Whether you’re a bitcoin believer or a vulture waiting to have your bubble predictions proved right, you’re probably keeping one nervous eye on the charts in anticipation of the crash everyone seems to expect any second now. Bitcoin Bubble Burst, presented today at the Disrupt Berlin hackathon, lets you you focus on other things, while it watches for major price changes and news events that could affect prices and alerts you in real time.

Although there are plenty of apps and services that warn you when bitcoin trading volume or price changes greatly, BBB’s creators told me, none give you adequate warning when something is going to happen. So they created a machine learning system (naturally) and trained it on data linked to bitcoin price changes.

Patterns in trading and key news items — for example, a country bans bitcoin, or taxes are proposed on cryptocurrency income somewhere — are detected by the system (the creators claim) and if they reach a certain threshold of importance, you will receive an email. The logic behind the warning is included — it isn’t just “sell! sell!” 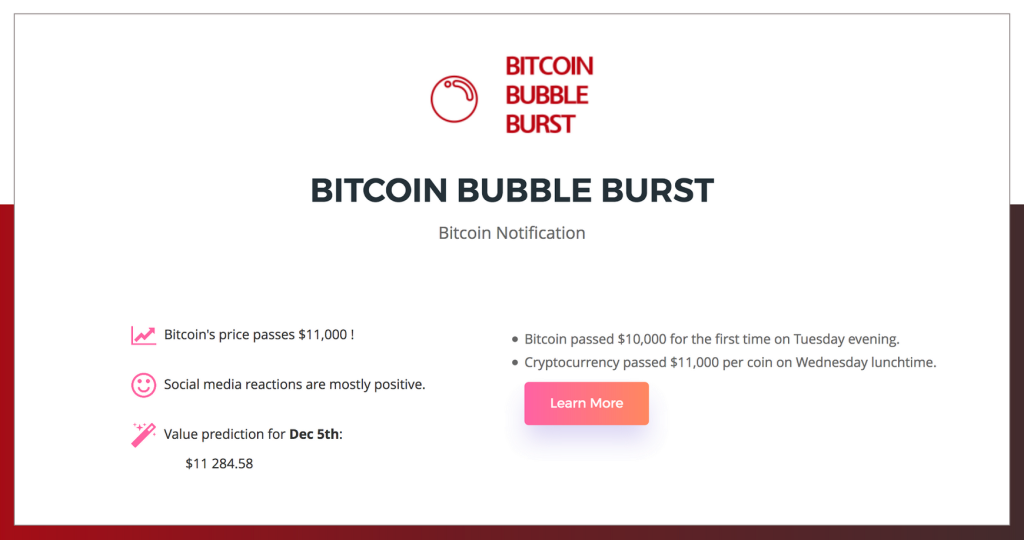 The system so far has been fairly accurate, they told me, predicting a few changes to within a handful of dollars — and it should get better as time goes on and its training data multiplies. They also plan to add other alert methods (SMS, for instance) and allow users to change the threshold at which they will be contacted.

Of course, the cryptocurrency world is still sort of fundamentally unpredictable, so all this should be taken with a grain of salt — but I like the idea of an agent that sits there and gives me a warning, even a false one, that the bit might be hitting the fan.

Bitcoin Bubble Burst was made by Claudio Weck, Saad El Hajjaji, and Karthick Perum; You can sign up at its Github page. (And watch their 60-second presentation below.)