Is Bitcoin a bubble? Here’s what two bubble experts told us

So we decided to ask a couple of experts on bubbles what they thought: Brent Goldfarb is a business professor at the University of Maryland, and William Deringer is a historian at MIT. Both have done research on the history and economics of bubbles, and they talked to Ars by phone this week as Bitcoin continues its surge.

Both academics saw clear parallels between the bubbles they’ve studied and Bitcoin’s current rally. Bubbles tend to be driven either by new technologies (like railroads in 1840s Britain or the Internet in the 1990s) or by new financial innovations (like the financial engineering that produced the 2008 financial crisis). Bitcoin, of course, is both a new technology and a major financial innovation.

“A lot of bubbles historically involve some kind of new financial technology the effects of which people can’t really predict,” Deringer told Ars. “These new financial innovations create enthusiasm at a speed that is greater than people are able to reckon with all the consequences.”

Neither scholar wanted to predict when the current Bitcoin boom would end. But Goldfarb argued that we’re seeing classic signs that often occur near the end of a bubble. The end of a bubble, he told us, often comes with “a high amount of volatility and a lot of excitement.”

Goldfarb expects that in the coming months we’ll see more “stories about people who got fabulously wealthy on bitcoin.” That, in turn, could draw in more and more novice investors looking to get in on the action. From there, some triggering event will start a panic that will lead to a market crash.

“Uncertainty of valuation is often a huge issue in bubbles,” Deringer told Ars. Unlike a stock or bond, Bitcoin pays no interest or dividends, making it hard to figure out how much the currency ought to be worth. “It is hard to pinpoint exactly what the fundamentals of Bitcoin are,” Deringer said.

That uncertainty has allowed Bitcoin’s value to soar a 1,000-fold over the last five years. But it could also make the market vulnerable to crashes if investors start to lose confidence. 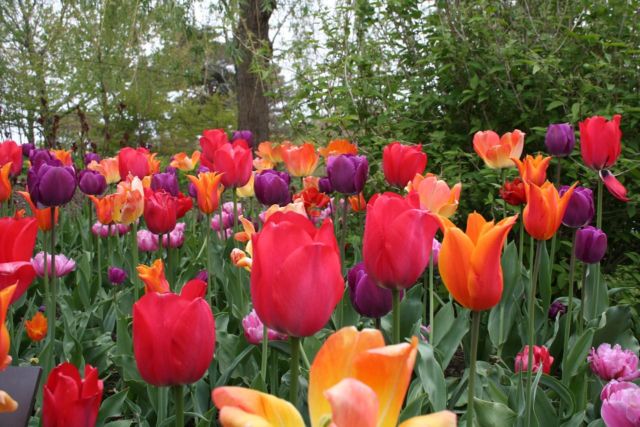 When we publish a story about Bitcoin’s rising price, people inevitably leave comments comparing bitcoins to tulips, one of history’s earliest and most famous bubbles. In the 1630s, tulips were still a novelty in Europe, having recently been introduced from the Middle East. There was a growing demand for tulips with exotic colors and patterns. Over the winter of 1636-1637, things reached a fever pitch, with speculators bidding tulip bulb prices up by a factor of 20 before the market crashed back to more normal levels in February.

However, Goldfarb noted, “a lot of those prices were all on paper. It was all happening in these coffee houses. They would bid up the price, but it was all for a future tulip. A lot of those deals were never consummated.”

Both Deringer and Goldfarb see some parallels between the tulip bubble and today’s Bitcoin boom.

“The tulip bubble was a technology bubble,” Goldfarb argued. “What they were doing was they were cross-breeding seeds but never were exactly sure what color the tulip would be until it grew.” That uncertainty helped to give certain tulips a sense of mystery and potential that pushed up their value.

Deringer also sees parallels between tulip mania and today’s Bitcoin boom. In both cases, he told us, “the value of the thing was not just about a calculation of its economic return but also about the aesthetic value of its coolness.” Owning bitcoins makes a statement about the kind of person you are and the things you value—much as owning a particularly exotic tulip helped set someone apart in 17th Century Dutch society.

“Being involved in the market has some cachet,” Deringer argues. “To own bitcoin is to make a statement about what sorts of technologies you value. Even to buy a bitcoin, let alone to mine bitcoins, takes a little bit of know-how.”

Why Bitcoin is hard to value

The Bitcoin bubble and tulip bubble are both somewhat unusual because the assets being traded aren’t expected to produce any kind of revenue for their owners. When someone buys a technology stock, they expect the company to eventually become profitable and pay dividends. You can say the same thing about railroad stocks in the 19th Century and radio and airplane stocks that contributed to the stock market bubble in the 1920s.

In all of these companies, share prices soared in the early “pre-revenue” years, when companies were still building their technologies and investors could entertain lurid fantasies of massive future profits. But when companies started trying to actually generate revenues and earn a profit from the technologies they were building, investors often found the results disappointing.

Bitcoin is different. Bitcoin owners don’t get interest, dividends, or other benefits from holding bitcoins. It’s like a technology stock that’s going to be pre-revenue forever. And this makes it less obvious what kind of developments could cause investors to have second thoughts.

Goldfarb compares bitcoins to assets with “artificial scarcity” like fine art. “It’ll have value so long as people believe it has value,” Goldfarb says.

We shouldn’t take this line of argument too far, however. Bitcoins don’t pay dividends, but their value can be pushed upward if a lot of people start using the Bitcoin network. The supply of bitcoins is permanently capped at 21 million. So if a lot of people want to make payments over the Bitcoin network, the value of bitcoins will need to rise (or at least stay at high levels) to accommodate that demand.

The other, weirder possibility is that bitcoins could prove to be a digital version of gold. Gold’s value defies conventional market analysis in much the same way bitcoin’s value does. Gold doesn’t pay a dividend and only about half of the world’s gold supply is devoted to jewelry or industrial use.

A lot of gold is held in vaults and under floorboards as a long-term store of value and a hedge against inflation and global turmoil—and this kind of speculative trading has a big impact on gold’s price. If enough people continue believing that gold is a good investment, this becomes a self-fulfilling prophesy.

Something similar could be happening with Bitcoin. Bitcoin now has a large subculture of “hodlers”—a deliberate, whimsical misspelling of “holders”—who make it a point of pride that they hold on to their bitcoins as a long-term investment regardless of short-term market fluctuations. The hodler ideology could be self-fulfilling in much the same way that goldbug ideology is: the more people who come to believe that bitcoins are a good long-term store of wealth, the more it will be a good long-term store of wealth.